I am delighted to be here representing the United Nations on this ceremony to mark the end stage of the 2014 Myanmar Population and Household Census.

Good morning and Mingalabar to you all

I am delighted to be here representing the United Nations on this ceremony to mark the end stage of the 2014 Myanmar Population and Household Census. I congratulate the Government and the people of Myanmar for having completed this enormous task. It was not an easy undertaking. No census is.   It was a massive physical, technical, logistical, statistical operation involving thousands of people in its making, with numerous specialists with experience of censuses in countries in different situations from across the world. On top of it, it was politically sensitive and took place at a time when trust was at a low ebb.  I therefore recognize the donors who supported this through financing as well as technical assistance over almost five years. It could not have been done without their involvement and partnership.

The scale of the exercise was large and it was timed at the start of Myanmar’s opening up and an ambitious reform towards democratization and peace.  It had its highlights and it has its disappointments, not least the fact that more than one million muslim people in Rakhine, over 69,000 in Kayin and almost 50,000 in Kachin were not counted. Though, the country made its utmost efforts to reach everyone, there are reports of those who opted out from being counted because of sensitivities and uncertainties. Even so, the census reached almost 98 per cent of the people in Myanmar.

This was a huge exercise and it was time sensitive in that enumeration had to be completed in a two-week period.  Enumeration therefore entailed the need to cover the largest ever country surface area in the history of census taking in Myanmar. As such, it stands as the largest source of data on the population and living conditions of the people in Myanmar. On the whole, it has been rated as a success. It also has lessons learned for the next time. I count on the authorities to ensure that it is even better the next time.

The 2014 count has produced many impressive products ranging from the main census reports, the reports on the States and Regions, Township Reports, and the thirteen Thematic Reports, the Census Atlas, the Policy Briefs and Infographics. This has opened up the doors to a new era to large and small scale socio-economic data for everyone. Congratulations.

In closing one chapter, another begins for the census. I recommend therefore that these reports continue to be used and digested for policy making, public dialogue, academic learning and the development of this country. This will ensure that the census continues to be impactful, especially at township level. Myanmar is full of potential and this has to be harnessed for all peoples to benefit, improve their quality of life and reach their full potential.

The wealth of data, results, and findings of the 2014 Myanmar Housing and Population Census offers profound power to all of us in Myanmar. The power to make good decisions that are informed by evidence as we pursue the best future for Myanmar and its people. The data came from the people and it belongs to them under custodianship of the Government.

The ethnic data is the last data set that has not been released yet. I would like to recognize the government’s commitment to support the ongoing consultations on ethnicity categories led by ethnic groups themselves. I look forward to government providing clarity on the way forward and an outline of decision making process for a union level reclassification of ethnicities. I hope that this will lead to an eventual release of the data on ethnicity.

As the 2014 census project nears completion, on behalf of the United Nations in Myanmar, I extend my heartfelt congratulations to the Government of Myanmar, and in particular the Department of Population in the Ministry of Labour, Immigration and Population, as well as UNFPA Myanmar. It is thanks to the tireless work and unshakeable commitment of these agencies that people in Myanmar and around the world are now able to pursue development, humanitarian and economic efforts based on evidence.  Thank you. 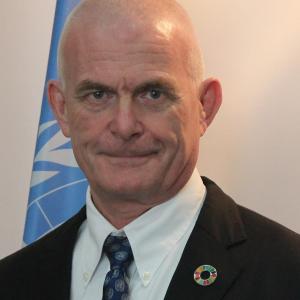