The Resident Coordinator is the designated representative of the United Nations Secretary-General to Myanmar and is responsible for the coordination of UN activities in the country. Recognizing that the three global pillars of the UN, development, peace and security and human rights, are interlinked and mutually reinforcing, the UN System in Myanmar works under the leadership of the Resident Coordinator to ensure a harmonized approach to support Myanmar to achieve its priorities, in line with the 2030 Global Development Agenda – The Sustainable Development Goals – and internationally agreed treaties and standards.

The UN Resident and Humanitarian Coordinator in Myanmar

The UN Resident and Humanitarian Coordinator for Myanmar is Ola Almgren.

Bringing 29 years of experience to the United Nations, Mr. Almgren held several leadership positions in the coordination of humanitarian assistance, development cooperation, and peace and security.  His most recent position was Resident Coordinator in the Philippines, prior to which he served as Director of Political Affairs and Head of the New York Office of the Joint Mission of the United Nations and the Organization for the Prohibition of Chemical Weapons (OPCW) for the elimination of the chemical weapons programme of the Syrian Arab Republic.

Mr. Almgren was previously Chief of Staff of the United Nations Organization Stabilization Mission in the Democratic Republic of Congo (MONUSCO) from 2010 to 2013, and Head of the Integrated Office of the Deputy Special Representative of the Secretary‑General for that Mission, from 2009 until 2010.  He also served in the United Nations Development Programme (UNDP) and its Bureau for Crisis Prevention and Recovery (2006-2009).

Prior to that, the Government of Sweden seconded Mr. Almgren to the Council of the European Union, where he assisted in the development of civilian crisis‑management doctrine and capacities.  He has served in various functions with the Office for the Coordination of Humanitarian Affairs (1990-1998) and other United Nations disaster and humanitarian coordination entities.  He served with the Municipal Government of the City of Stockholm in 1998 and resumed his United Nations career in 2003.

Mr. Almgren holds an Executive Master of Business Administration from the Stockholm School of Economics. 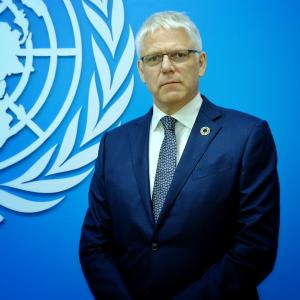