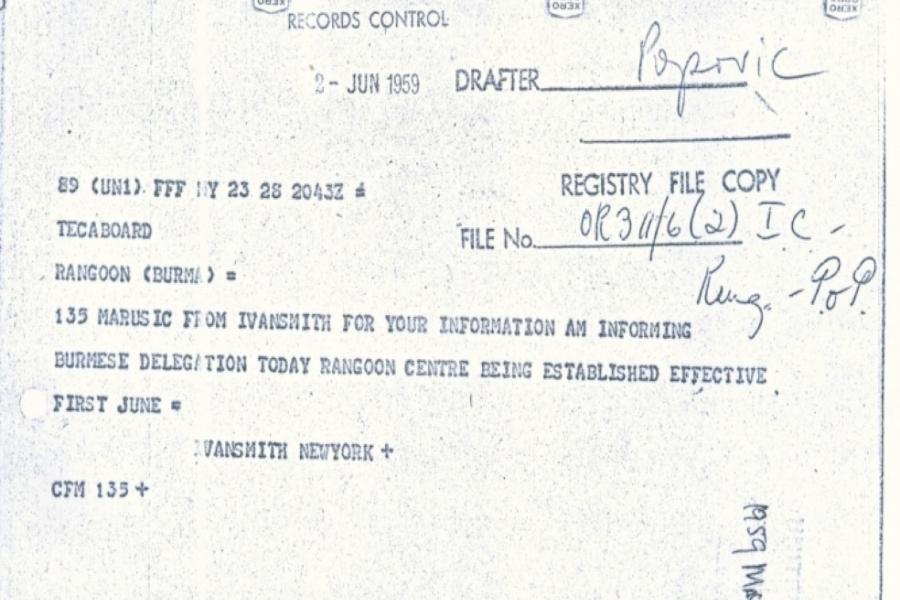 On 2 June 1959, the UN Office in Rangoon received a cryptic telex from Headquarters in New York:

Sixty years later this month, the UN Information Centre (UNIC) Yangon celebrates its sixtieth anniversary. Many retired colleagues, with their long institutional memories, had so many stories to tell.

“I travelled with suitcases full of UN material for libraries across the country and carried UN films for outdoor shows using bedsheets for screens.  Villagers would travel miles - even by bullock cart - just to see our documentaries.  It was so heartening,” reminisced Former UNIC Information Assistant Alison Mya Mya Win.

“I visited schools, colleges, and universities, to spread the UN message.  I travelled with candles on trains without lights, planes with erratic schedules, buses, jeeps, pickup trucks, and even a tractor; as well as bullock carts, elephants, steamers and sampans,” she said.

Myanmar has not changed much. The UNIC’s work is primarily the same, although we now have better means of communication and transport.

UNIC Yangon has been visited several times by UN Secretaries-General. U Thant (who was from Burma), Kurt Waldheim and Ban Ki-Moon all came while in office.  Even Kofi Annan spent a considerable amount of time in Myanmar after retirement.

The present Secretary-General, Antonió Guterres, came here when he was High Commissioner for Refugees. UNIC Yangon moderated his press conference.

At the UNIC’s birthday party, Leslie Shwe Wa, the second UNIC Information Assistant, walked us down memory lane, dropping many names and place names along the way.  He said that the first Information Centre was housed in the Foreign Office (the UNIC was established at the request of the Burmese Government).

While the nature of the UN’s work in the country has changed from what it was sixty years ago, UNIC Yangon’s purpose remains the same.

As Alison put it: "My job is to tell the people of Burma what the UN is doing here and all over the world - and to tell the UN, what it is doing in our country."