The seven lives of a cat: Memories of a Holocaust survivor

The UN Information Centre (UNIC) in Yangon invited Vered Kater, a Holocaust survivor, to speak at the screening of the documentary 'Who will write our history'.

My name is Vered Kater, a Dutch name. Kater is “cat” in English and we are from the Jewish priestly lineage of Cohanim. There is a saying that a cat has “seven lives” and always lands on its feet…I wonder sometimes if my name determined my destiny.

During the Second World War, my family, three small children and both parents, survived thanks to good Christians. My mother worked as a cleaner, posing as a poor Christian girl. My father, an editor, worked with the sons and daughters of a farmer. He learned how to feed pigs and clean stables.

My eldest brother, 4 years old at that time, had it hard. The underground movement had to move him frequently from hiding place to hiding place.

My 2-year-old brother went into hiding in a family with three children who immediately adopted him as the younger brother and, till today, he is part of this family.

My first life was as a normal newborn, in spite of the Second World War raging around us. I was born in Eindhoven and received breast milk.

My second life began at the age of six weeks. The underground warned the Jews about an expected roundup (razzia) and I was taken to an unmarried elderly lady, the sister of my “war father” who hid me in a cupboard. She took good care of me, so much that I started babbling and could not stay in the cupboard anymore.

My third life, at the age of three months, started with a journey in a cardboard box. After swallowing a tranquilizer, I was wrapped in a cloth and secured safely inside the box. I travelled with my “war father” by train and bus, for about 2 hours, to his home village near Amsterdam. He stayed during the week with his sister as he worked in Eindhoven. He surprised his wife with me; they both loved me very much. After recovering from measles and chicken pox, I had a wonderful life there, as the only child of a Catholic mother and a Reform father. My memories of that period are fuzzy, but warm and happy. The three years there were, looking back, the most peaceful period in my life. Unaware of the dangers and surrounded by love, I thrived.

My fourth life was when the Second World War ended. I was torn away from my cozy home and put into a new family. My parents, total strangers for me, did not know me. My big brothers did not know our family either; their little sister was a toy to be teased. Slowly, my family members learned to accept each other, but the real happy times in my life were the periods I spend with my war parents.

To live in a broken family was hard. Many families that survived the war and hiding periods became broken families. My parents divorced after the war; a second marriage with another Holocaust survivor lasted only a few years. Uncles, aunts and grandparents all suffered, and several did not return. No one wanted to talk about these dark times. Their great silence surrounded me like a wall of conspiracy.

My fifth life is thanks to my war parents’ love. I decided to become a nurse, to give love and life, like they had done for me.

My sixth life started when I decided to immigrate to Israel in 1966. This life started with the Six-Day War and was followed by more wars. The great difference for me, born in a war, was the fact that in all the Israeli wars I could be active as a nurse and provide medical aid to victims.

My seventh life is my obligation to implement an old Jewish saying “Whoever saves one life, saves an entire world”.

The example of the unconditional love of my war parents made me help the needy in different countries. They had risked their lives for an unknown baby. Had the Germans discovered me, they would have sent the three of us to a concentration camp.

My story should be shared, as the silence of survivors will enable bad people to kill others because they are different. Even if it is difficult, we have to speak up about the importance of accepting the other regardless of colour, race or religion.

My meeting with Aye Win (of UNIC Yangon) was on the International Day of Commemoration in memory of the victims of the Holocaust in Yangon 2019. I was asked spontaneously to tell my story, to share the horrors, hate and love I had experienced. Aye Win taught me how important sharing this information is to prevent more suffering. 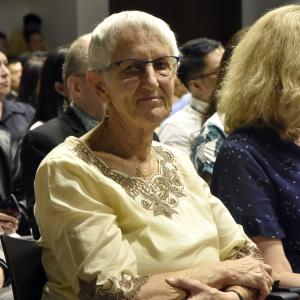