How providing cash, piglets, and business training is helping Rohingya survivors of gender-based violence, and those at risk, in Myanmar’s Rakhine state. 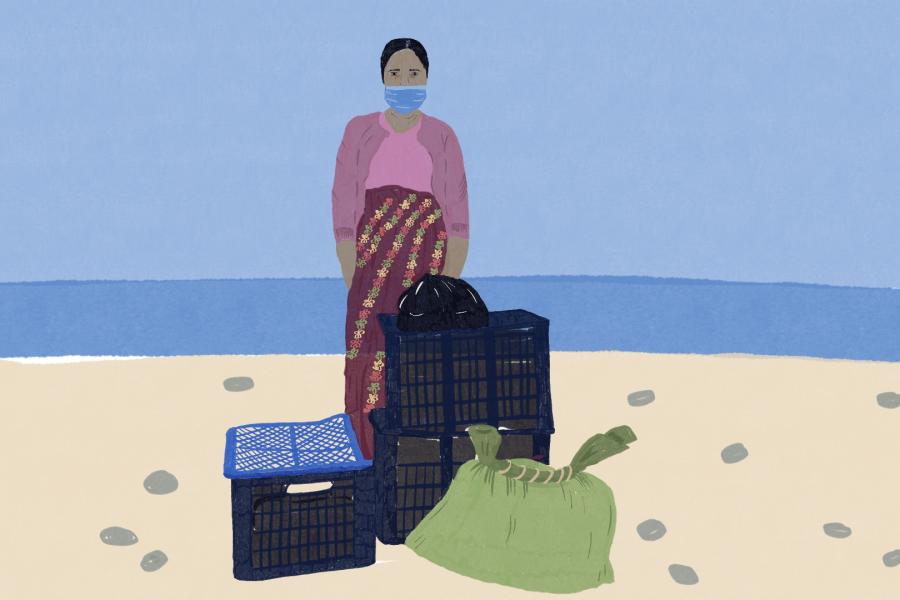 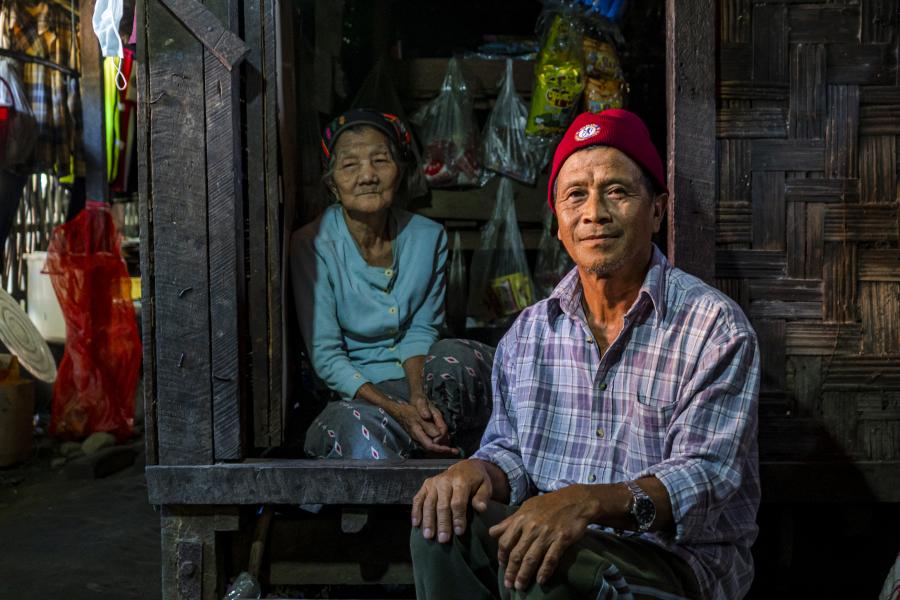 People think that we (persons with disabilities) cannot do anything. We want to show them our capacity that we can do like other people. 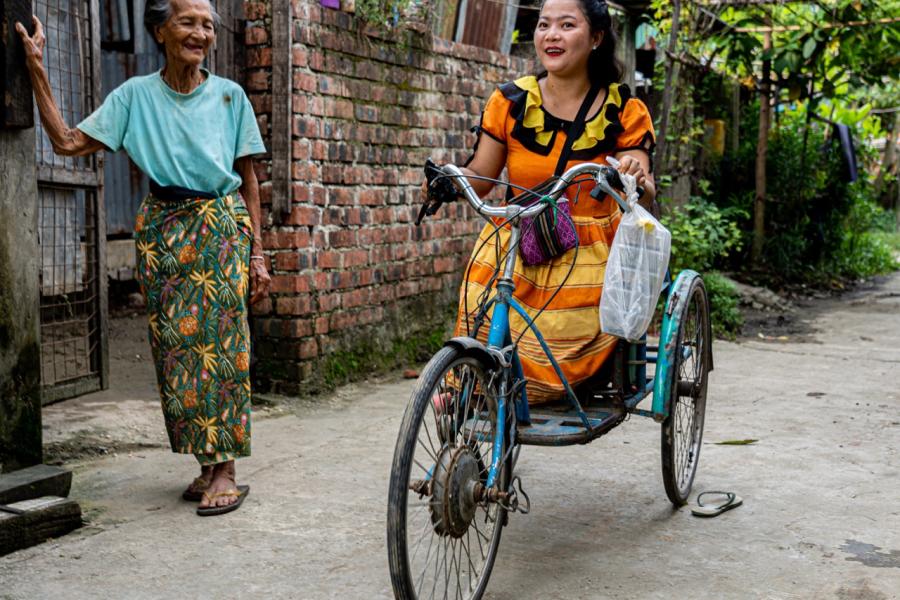 Statement attributable to the Spokesperson for the Secretary-General - on Myanmar

Statement attributable to the Spokesperson for the Secretary-General - on Myanmar

The Sustainable Development Goals in Myanmar

Despite facing significant challenges, women-led organizations are ensuring that the gendered aspects of violent conflict are recognized and women are meaningfully engaged in the humanitarian response. As a result of their efforts and strategic adjustments to provide relief and recovery support, Myanmar was amongst a small number of countries that saw an increase in the participation of local women-led organizations in humanitarian planning between 2020 - 2021, according to the UN Secretary-General’s 2022 Report on Women, Peace and Security. These organisations are also looking to the future, through initiatives focused on developing a cadre of women peace trainers, or identifying strategies to ensure women’s participation and representation in future political processes. “Some people are now demanding Myanmar be a Federal Union,” a female participant* at a Gender and Federalism training said. “We’re analysing the importance of women’s participation in politics, the role of civil society organisations, and identifying the opportunities and challenges of Federalism in advancing gender equality,” she added. Unfortunately, global aid to peace and security continues to underprioritize gender equality, with women-led organizations’ contributions being undervalued and under-resourced. The Women, Peace and Security agenda in Myanmar is more relevant than ever, and there remains a clear need for dedicated resources to support women-led civil society efforts to respond to current situation. At the core of this agenda is the recognition of the immense sacrifices, the determination, persistence and the innovation of women and women-led organizations. UN Women Myanmar works with various partners to ensure women and girls affected by crises lead, participate in and benefit from relief, response, peace and development efforts. *Name of the female participant is not revealed for security reasons.
Read more
1 of 5
View all
Press Release
31 January 2023
MEDIA ADVISORY: As Myanmar crisis enters third year, Special Envoy Heyzer urgently calls for international unity on humanitarian aid, stance on elections and civilian protection
Over the past two years, the military’s disruption of Myanmar’s democratic transition has inflicted enormous damage on the country and people, and led to a multidimensional crisis spanning severe humanitarian, human rights and socio-economic consequences with serious regional ramifications. As of the end of last year, 15.2 million people were food insecure, more than 1.5 million internally displaced and an estimated 34,000 civilian structures had been destroyed since the military takeover. The Rohingya people in refugee camps and those remaining in the country, as well as other marginalized communities, are at heightened risk with 2022 marking one of the deadliest years for people forced to undertake perilous sea journeys. The Special Envoy renewed the United Nations’ solidarity with the people of Myanmar and the need for protection of all communities, which the United Nations Secretary-General reinforced in his recent statement. She reiterated the Secretary-General’s concern regarding the military’s stated intention to hold elections, which threatens to worsen the violence and instability in the absence of inclusive political dialogue and conditions that permit citizens to freely exercise their political rights without fear or intimidation. The Special Envoy urgently calls for greater unity and commitment among the international community in three key areas: First, the international community, and particularly donors and Myanmar’s neighbours, must come together with humanitarian actors including local humanitarian networks to scale up urgently needed assistance to all those in need without discrimination and through all available channels. A commitment to increase levels of cross-border aid, along with more flexible banking and reporting rules, will facilitate humanitarian support to people most in need. Second, the international community must forge a stronger unified position regarding the military’s potential elections which will fuel greater violence, prolong the conflict and make the return to democracy and stability more difficult. Third, the international community must implement measures to increase protection for civilians inside Myanmar as well as for Myanmar refugees in the wider region. Such measures could include an on-the-ground monitoring mechanism as part of the implementation of ASEAN’s Five-Point Consensus and its commitment to stop the violence in Myanmar, and regional frameworks for the protection of refugees and forcibly displaced people. “It is inconceivable any form of peaceful and democratic transition can be initiated by those perpetrating harm on their own citizens,” Special Envoy Heyzer said. “The violence has to stop, including the aerial bombings and burning of civilian infrastructure along with military’s ongoing arrests of political leaders, civil society actors and journalists.” Guided by her ongoing consultations with women and youth, ethnic, political and community leaders, and refugee representatives, the Special Envoy is focusing on the following four areas: an Inclusive Humanitarian Forum; upscaling access to education for Rohingya refugees and host communities; regional frameworks for the protection of refugees and forcibly displaced people; and advancing the Women, Peace and Security agenda in Myanmar.
Read more
1 of 5
Press Release
31 January 2023
Statement attributable to the Spokesperson for the Secretary-General - on Myanmar
The Secretary-General welcomes the 21 December 2022 adoption of Security Council Resolution 2669 (2022) as an important step and underlines the urgency for strengthened international unity.  As called for by the Security Council, the Secretary-General’s Special Envoy will coordinate closely with the new Special Envoy of the ASEAN Chair to engage intensively with all relevant parties in Myanmar to achieve an end to the violence and to support a return to democracy.

The Secretary-General is concerned by the military’s stated intention to hold elections amid intensifying aerial bombardment and burning of civilian houses, along with ongoing arrests, intimidation and harassment of political leaders, civil society actors and journalists. Without conditions that permit the people of Myanmar to freely exercise their political rights, the proposed polls risk exacerbating instability. 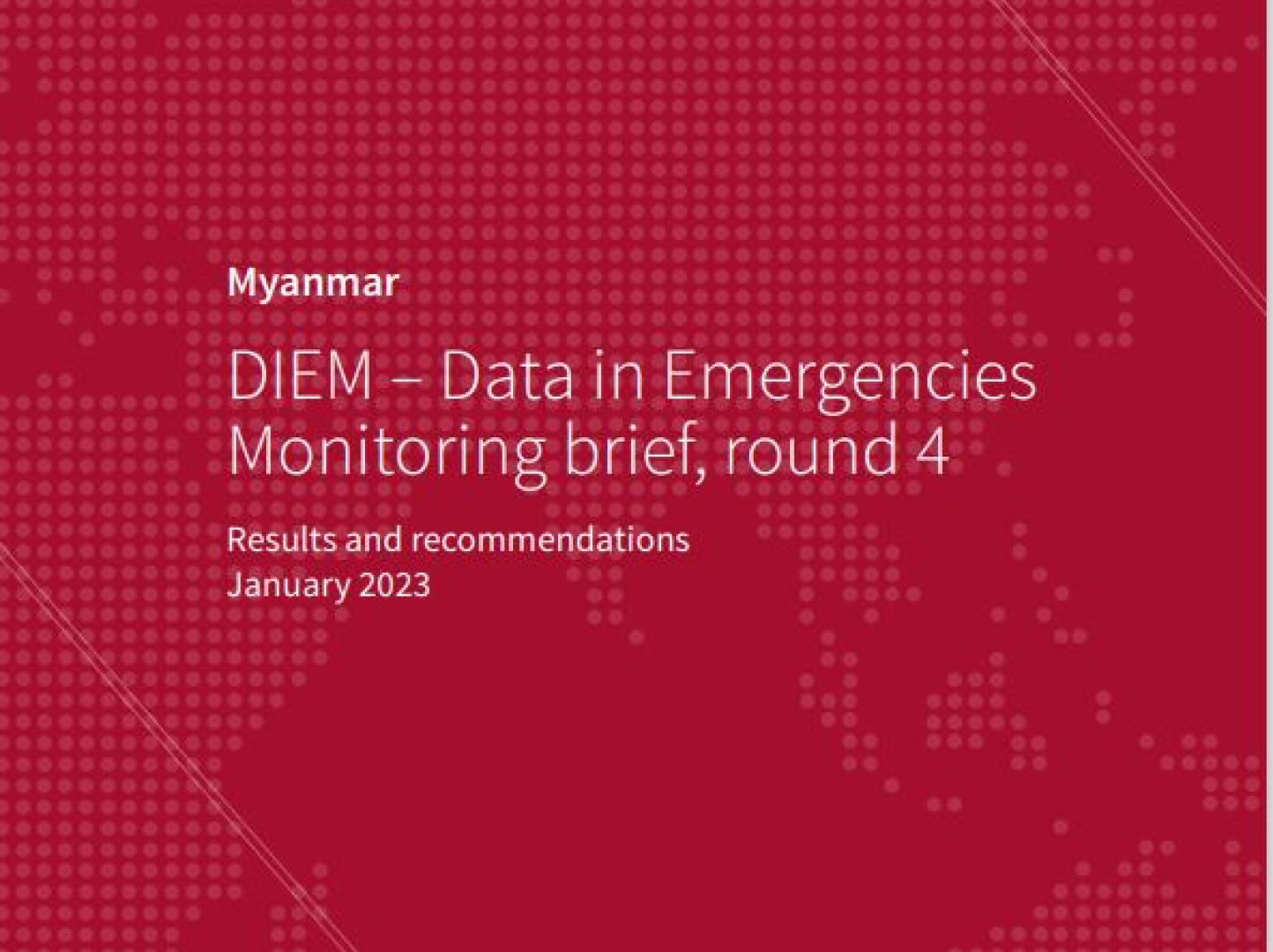 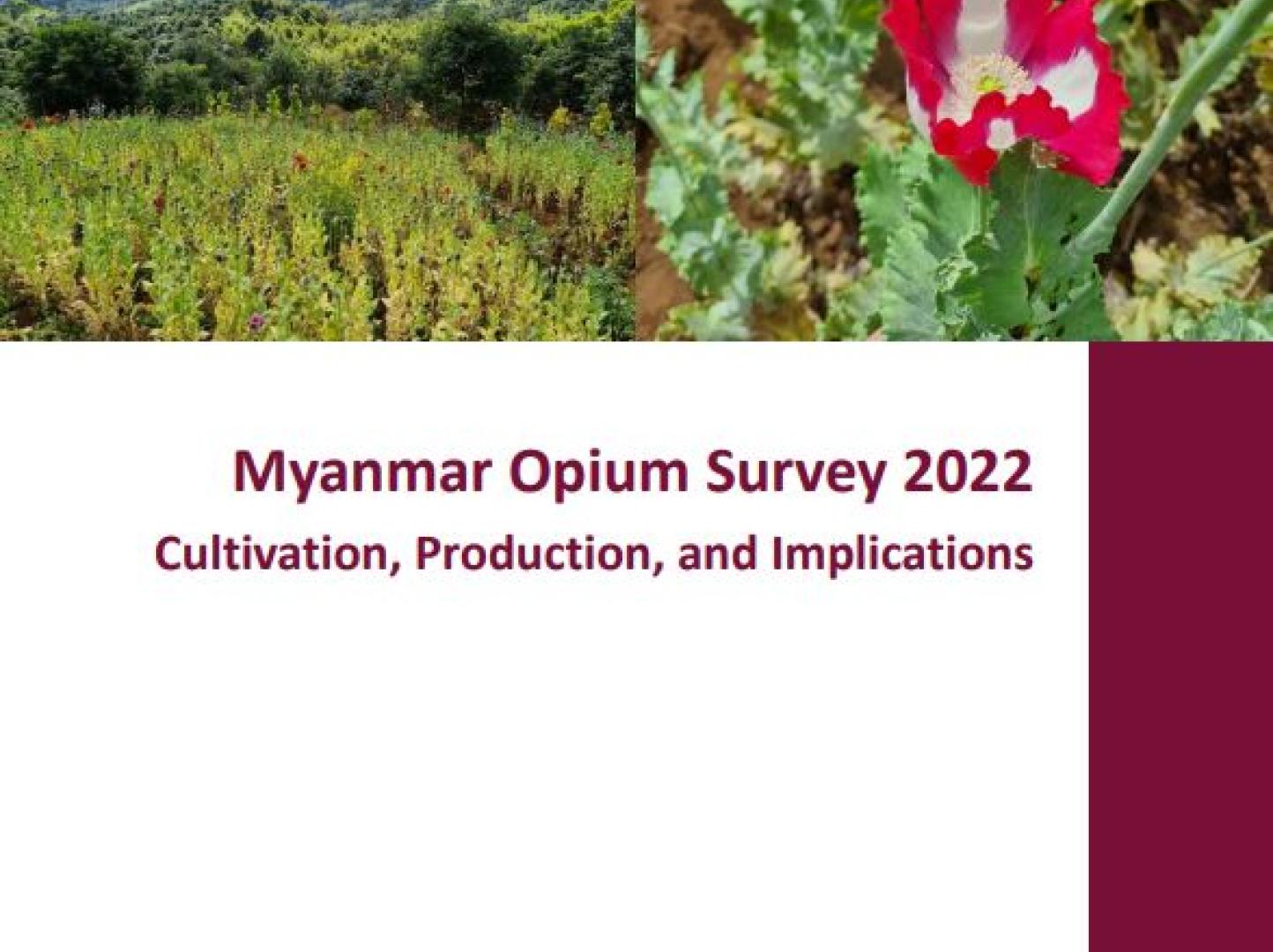 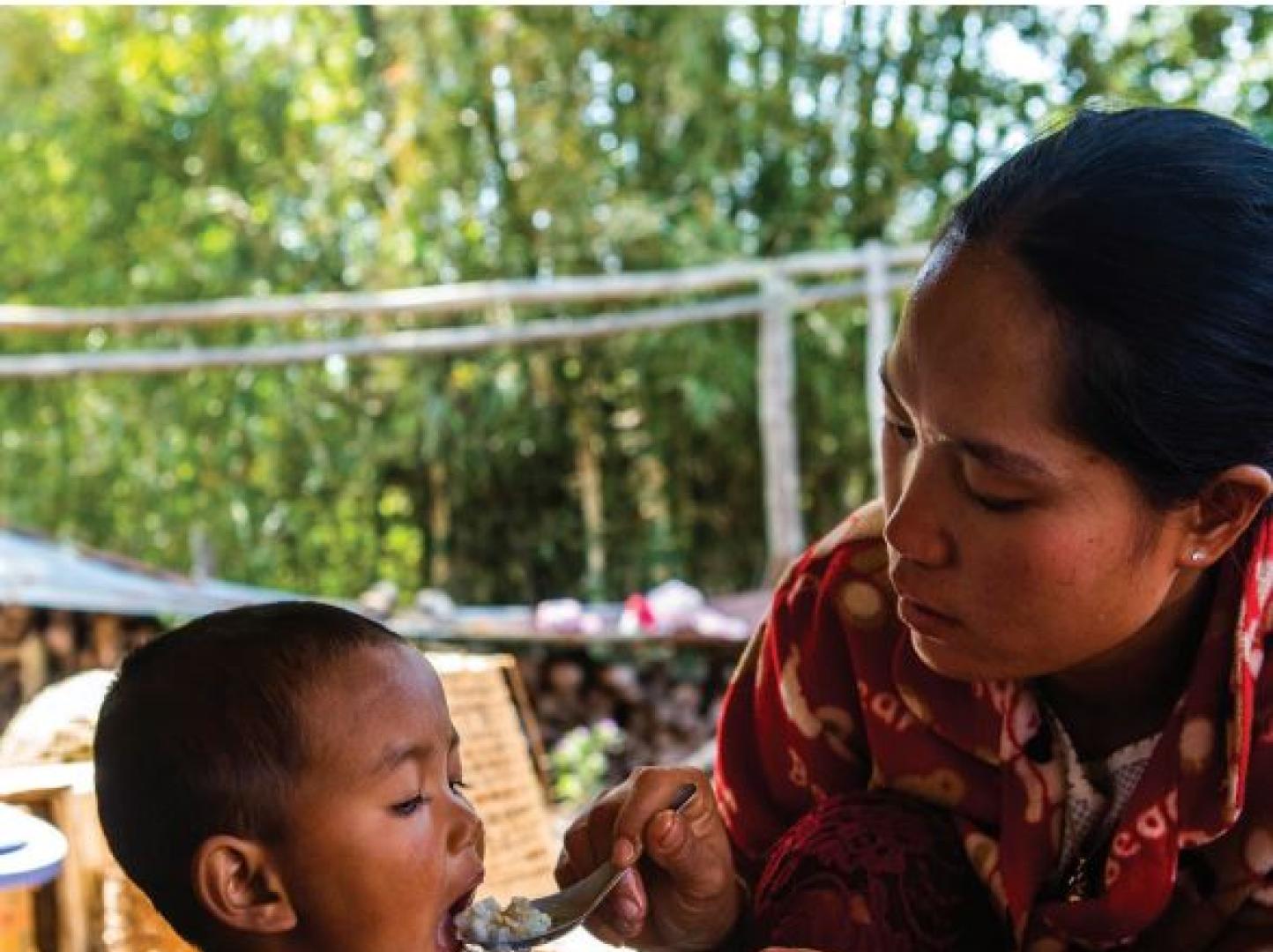 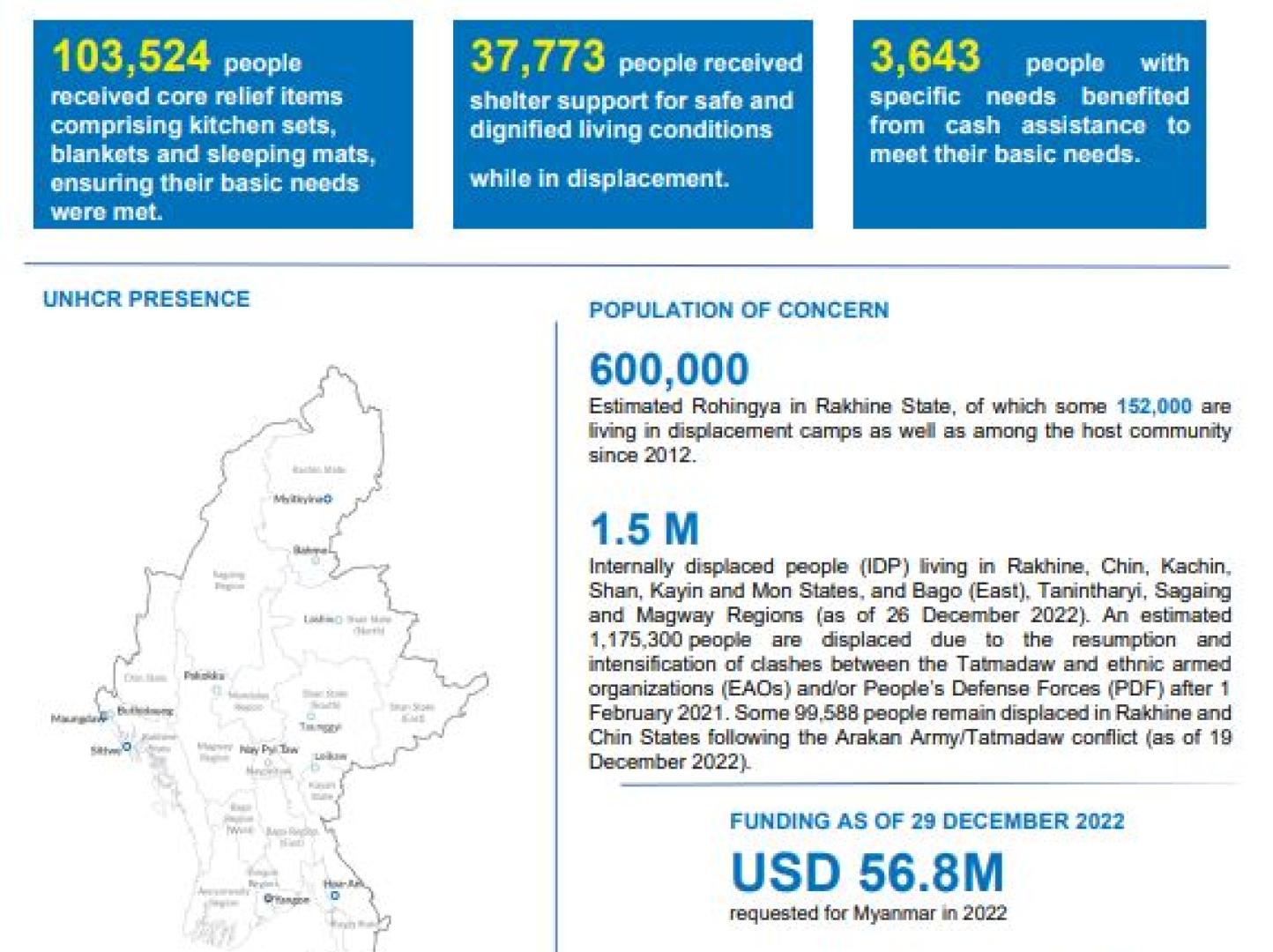 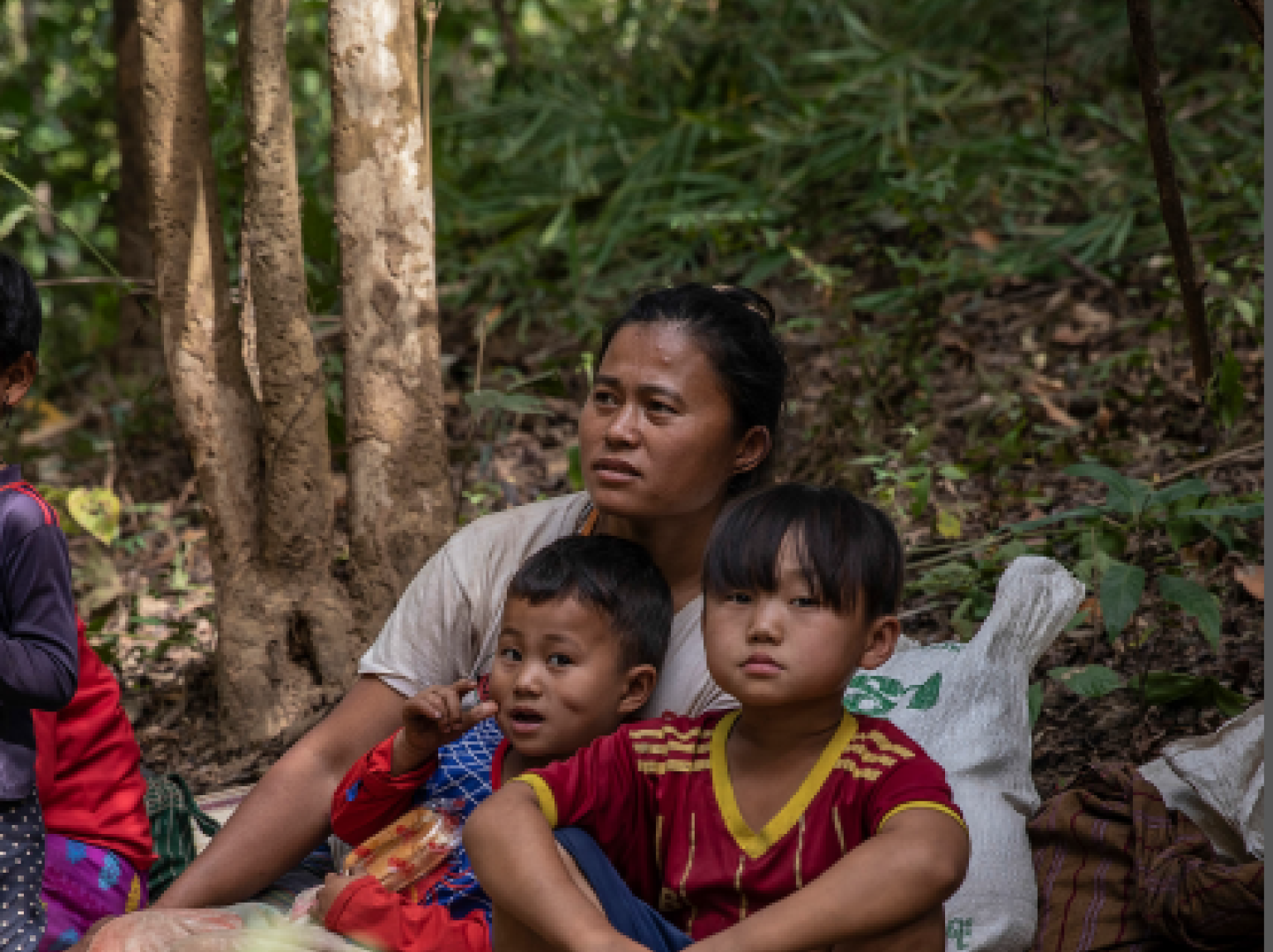 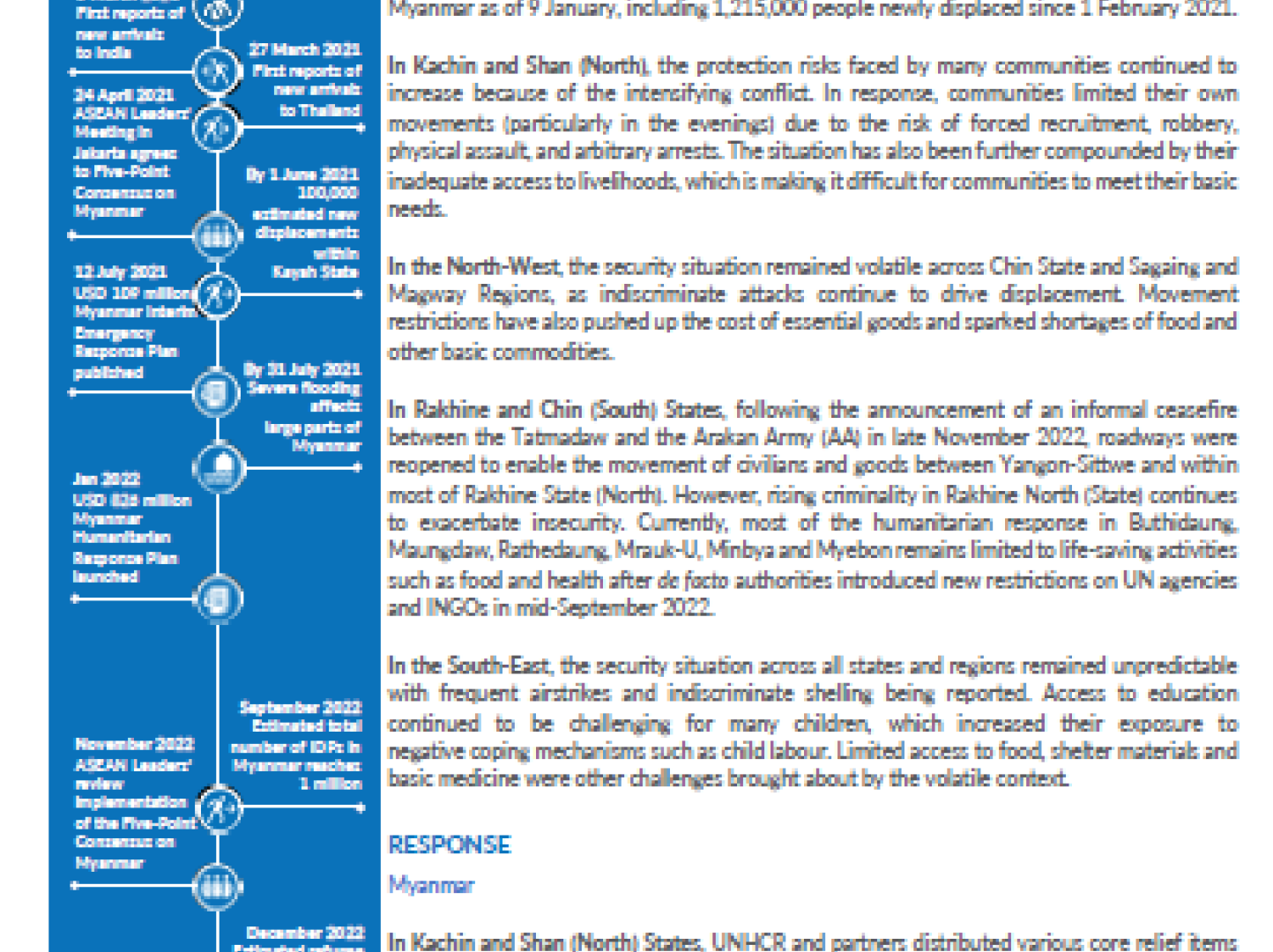 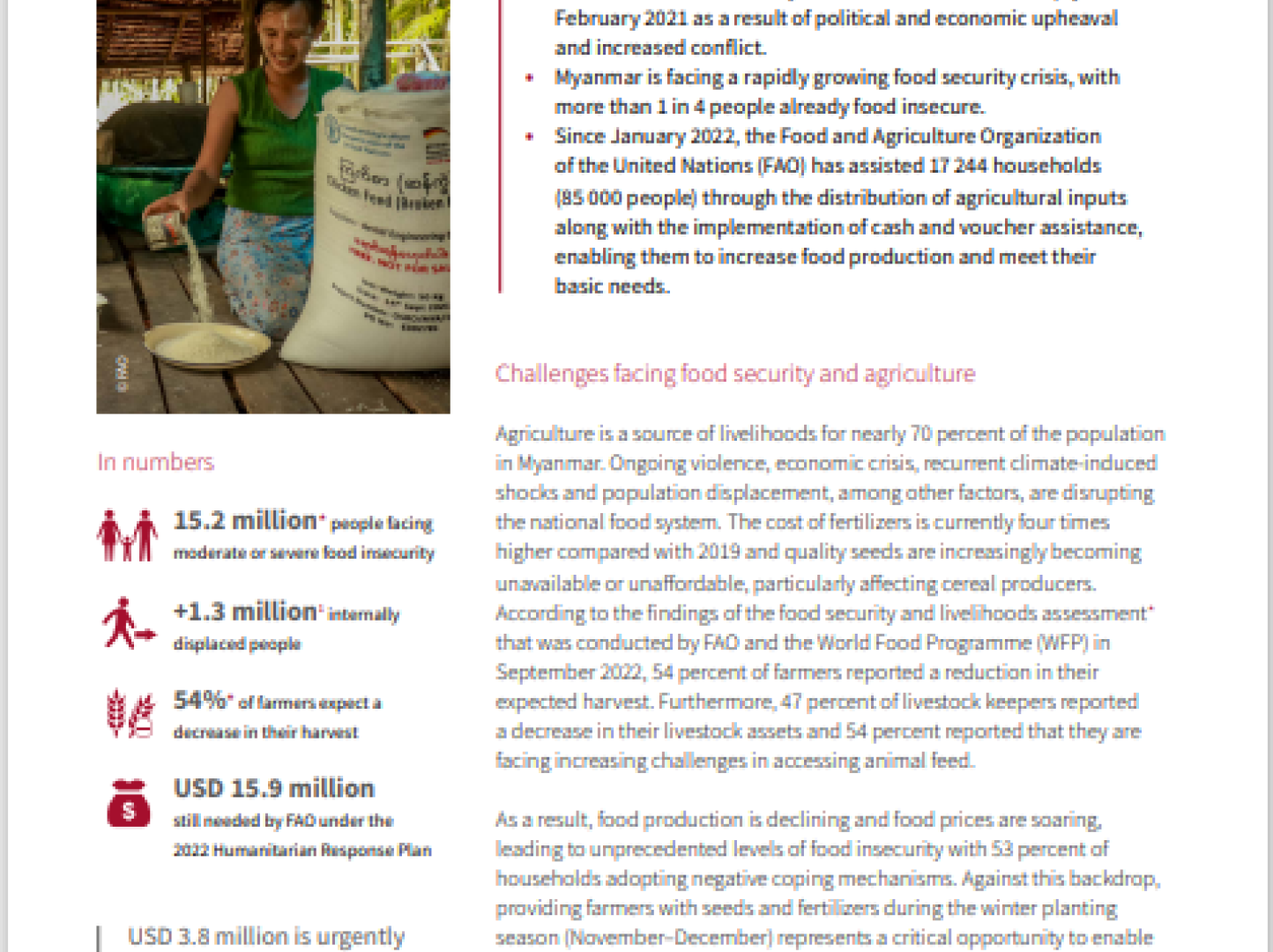 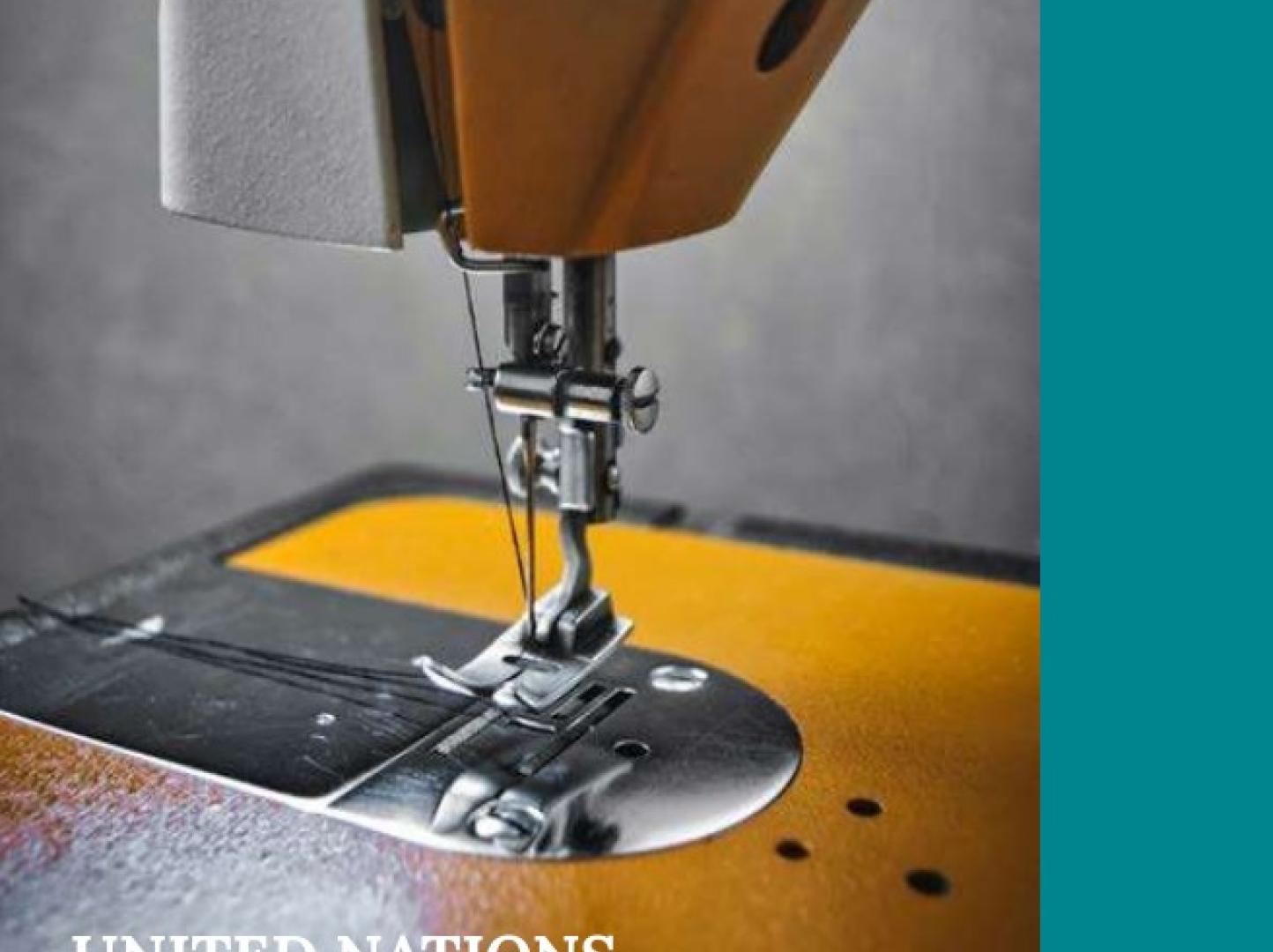 Resources
19 October 2022
Livelihoods Hanging by a Thread: A Survey of Garment Workers and Firms 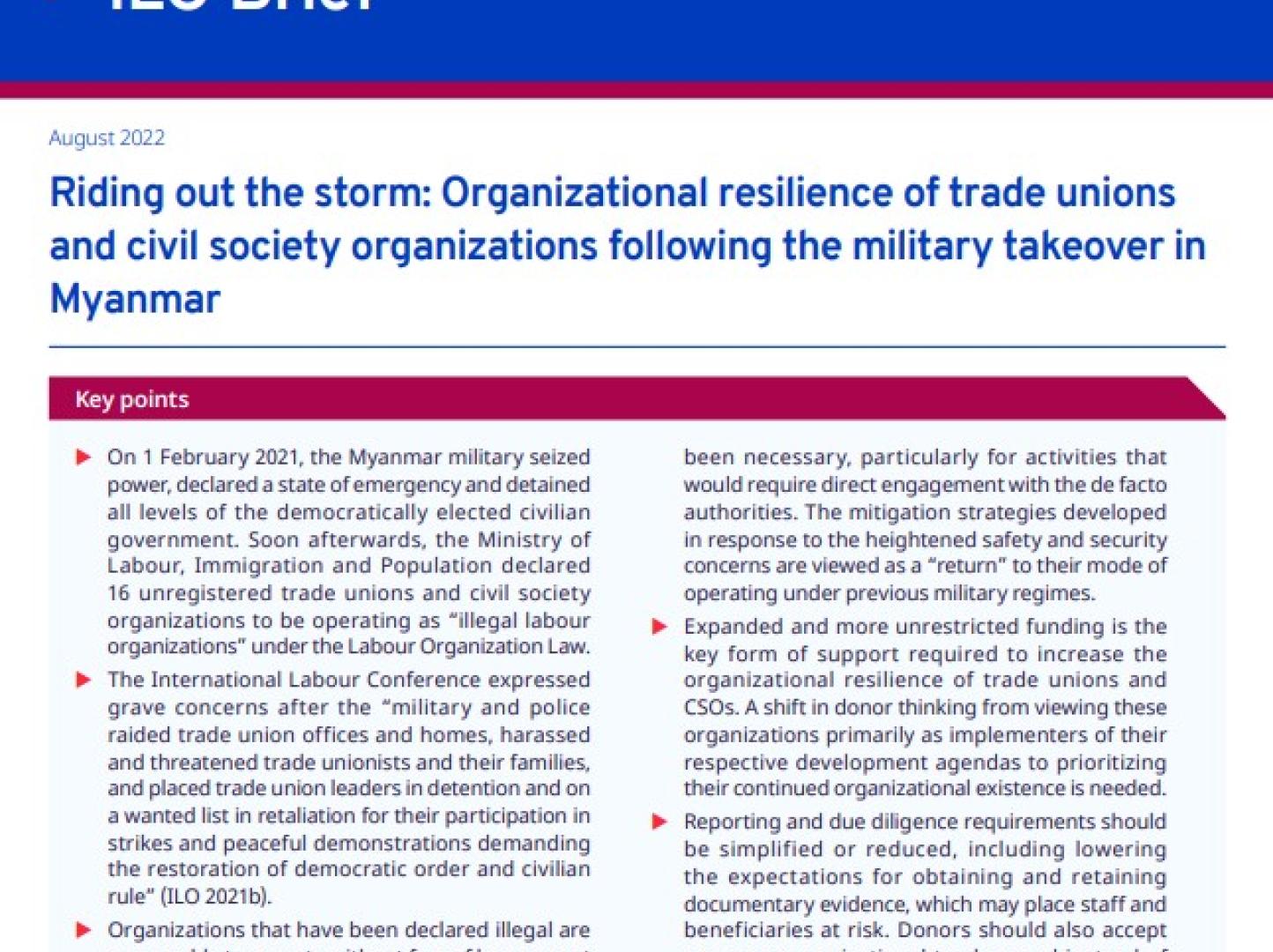 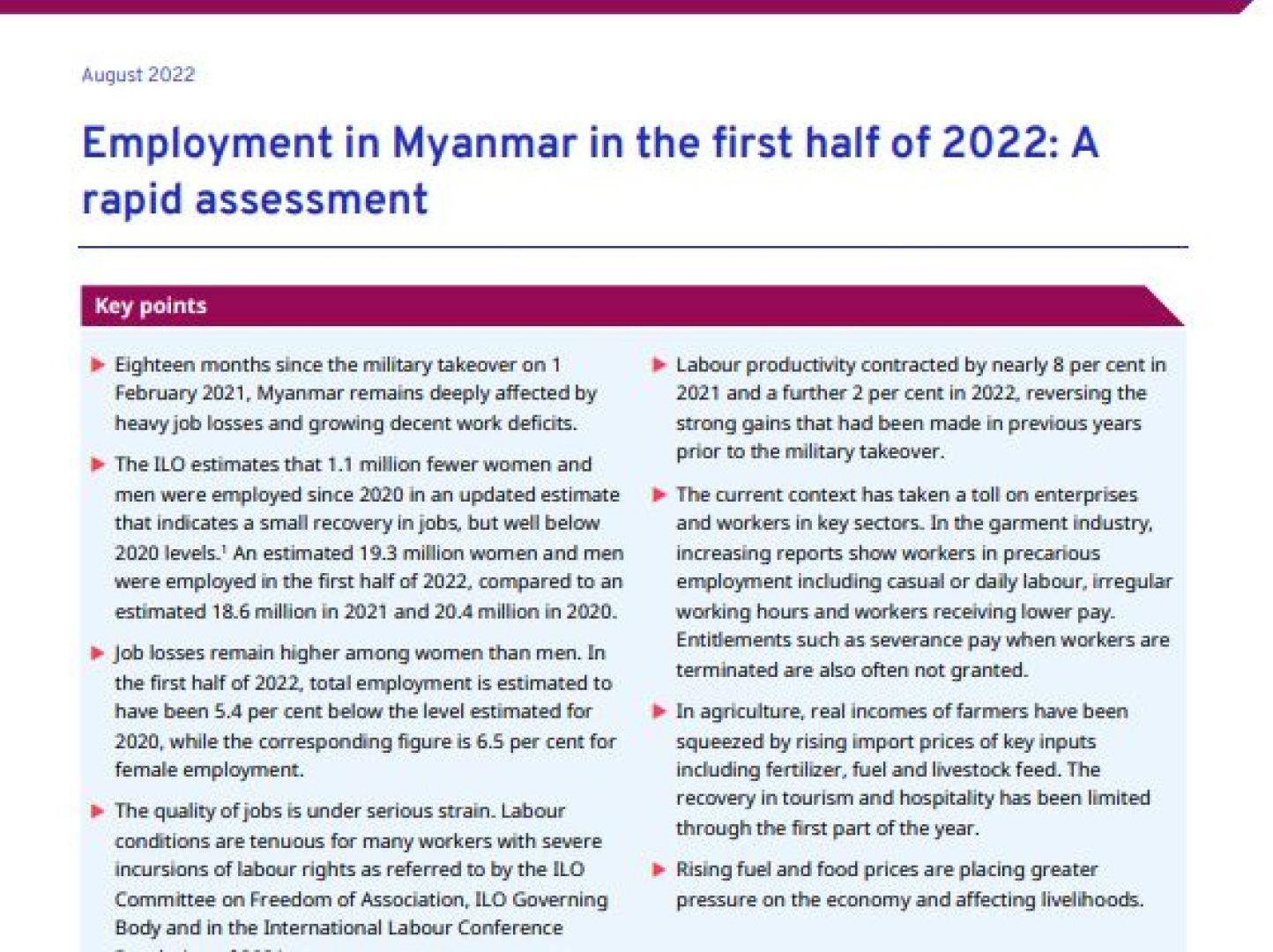 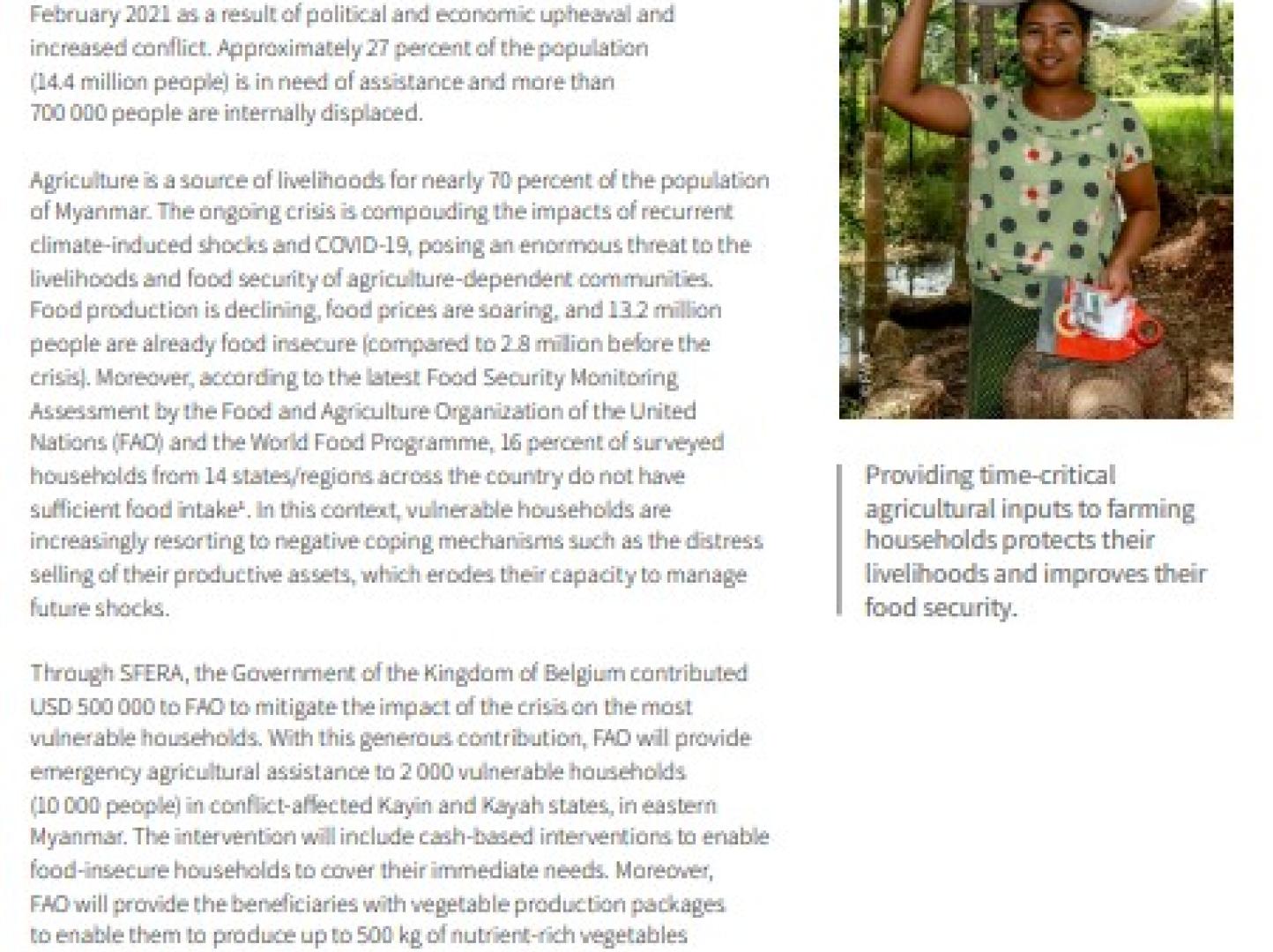